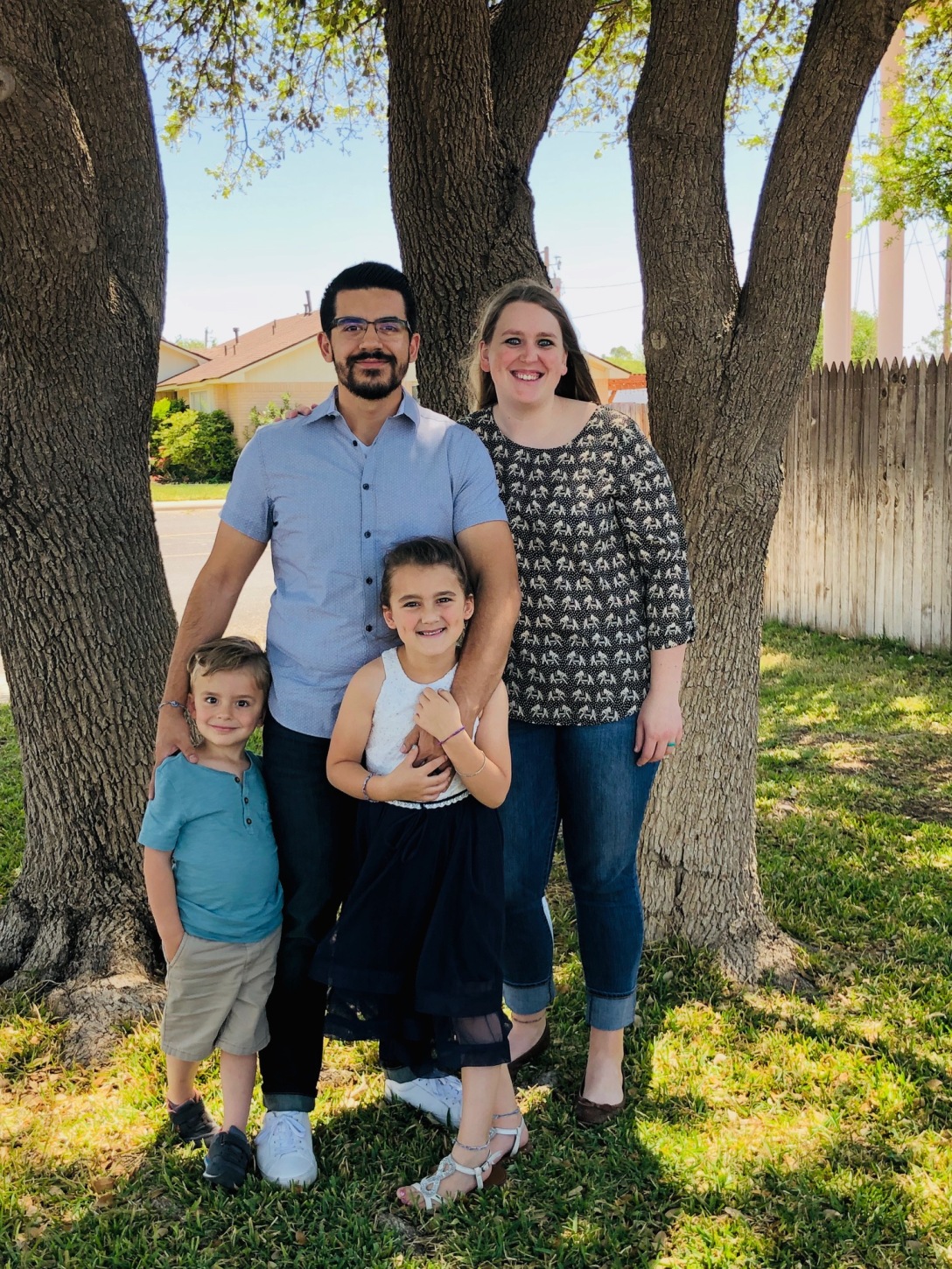 I was born and raised in Odessa, Texas. I never wanted to leave. Except for that brief time in High School when I was bragging to everyone about how I couldn’t wait to get out. I just wanted attention. I never had any intentions of leaving. I loved Odessa. I was comfortable there. I knew my way around. I could take a shortcut to almost anywhere. I knew the curves in the roads; how long each light stayed red before turning green. Most of my friends lived there. My family. My church. Why would I ever want to leave?

My husband, Mike, is from California. And from the moment I met him he’s been dreaming about getting out of Odessa. He created this beautiful picture of a life we could live somewhere, anywhere, else. I always listened and smiled, and allowed myself to dream a little. And then I would pull it all back and firmly tell him we weren’t going anywhere. We were living in my dream home. We had good, dependable jobs. We had an endless supply of babysitters and date nights. It was perfect. We were content. Until we weren’t.

I think I always knew deep down that eventually we would leave Odessa. I was just trying to stall it as long as I could. I was afraid. But, very slowly, my mind began to change. I started to let myself dwell on the possibilities a little longer than before. In December 2018, I attended a women’s conference at our church. As I was praying I very distinctly heard God telling me to move. And very specifically to DFW. I immediately began to weep. I wasn’t ready. I was scared. I knew that everything was about to change. Over the course of the next few weeks, I found myself in tears often. I wasn’t ready to part with the life I had. I wasn’t ready for things to change. I didn’t want to go somewhere that I didn’t know my way around. I wanted to keep my comfort and stability.

It wasn’t until the end of January that I finally told Mike I had heard from God. I remember it being a very surreal moment. I had spoken it out loud and I couldn’t take my words back. It was in action. We were moving forward. We didn’t have a plan. We didn’t have jobs, or a home. But we knew we couldn’t stay in Odessa any longer. Mike began working on his resume, and together we started looking at houses to rent. It was all happening so fast. I told my best friend, but other than that we kept it to ourselves. Nothing was permanent yet, so we weren’t really ready to start sharing our news. I had a lot of anxiety about telling my family. I knew they were going to be sad, and I wasn’t ready to deal with that. I was still trying to get a handle on my own emotions about the situation.

Mike sent out a ton of resumes and applications. I was super nervous, but he got a phone interview with one of the companies almost immediately. The phone interview went great, and they wanted him in Fort Worth to meet him officially. This was happening. I am not good at keeping secrets so I told my mom about our plans to move, and it wasn’t long before my whole family knew. It was honestly a huge relief. My family was sad, just as I had imagined, and our conversations were hard. My heart was breaking, but I knew we had to go. I knew that I had to fight through my desire to stay. We had been called to go, and continuing in Odessa wasn’t an option.

We told Lainey and Noah about our plans to move and they were actually really excited. This was such a relief. I don’t think they fully grasped the entirety of what it meant to move, but they couldn’t wait to go. They saw it as a new, fun adventure.

On March 6 we got word that Mike had gotten the job. It was his dream job. Out of all the applications he sent out, this is the one he really wanted. And he got it. Everything was working out in an unreal way. We knew we were doing what we had been called to do. The only bad thing about getting this job, was that they wanted him to start on April 2nd. IN LESS THAN A MONTH. We still didn’t have a house, because we were waiting to officially hear if we had the job. And since we didn’t have a house we didn’t know what school Lainey would go to. I didn’t have a job. There were still so many unknowns.

The day we told our current employers that we were leaving I was a ball of nerves. Mike and I worked together at a local sign shop. I had been there almost 12 years, and he had just hit his 9 year mark. We had a close relationship with the owners and our fellow employees. I was so afraid that they were going to be mad at us. That they would feel betrayed. I was so anxious I almost couldn’t breathe. But they totally understood. They were upset about us leaving, but they understood why we had to go. And to top it all off, my boss offered me my job from Fort Worth. I was going to get to work from home. What was even happening?

We had finally told everyone we were moving, and I felt so much relief. But there was still so much to do. We decided that we wouldn’t have enough time to sell our current house, and renting it would be the best option. Luckily, we have a friend who manages rental properties. We gave him our information and he began looking for a renter. In just a short amount of time we still had to pack up our house, find a new house, have a garage sale, and then actually move. Mike found us a ton of rental properties to look at in Fort Worth, and we took a day to go and find a house. We saw several houses that day, but ultimately it was the very first one that we looked at that we knew would be our first home in DFW. It was perfect, and the landlord was so sweet and kind. We filled out our paperwork and set the date to move in March 29th.

In just a couple of short weeks so much had changed. There was still a lot to do, but we were slowly making our way through. We had a garage sale the weekend before we moved. We had a great turn out, and made some extra money for the move. Now, all that was left was to finish packing. We had a renter for our house, and it seemed like everything was good to go.

We rented a U-Haul and a trailer to haul Mike’s car. But the day Mike went to pick it up, they didn’t have a truck the size we needed. We got what they had, but it was very obvious that it wasn’t going to work. All of our stuff was not going to fit. It was the DAY BEFORE we were supposed to move, and we couldn’t fit all of our things in the truck. Thankfully, my parents let us borrow their trailer. We were able to fit Mike’s car and the remaining items that didn’t make it in the U-Haul. My car was full of boxes and clothes. Our table was in the back of my parents truck. Even my grandparents had a load in their back seat. But we had everything and we were ready to go.

The hardest part of this transition was saying goodbye. I’m terrible at it. On our last Sunday at our church I turned bright red and stood in the middle of all of my friends weeping uncontrollably. My last day at my job, I put on sunglasses so no one could see me crying, and went out the back door. When my aunt called me to wish me well, I couldn’t even say words. I was a mess of heavy breathing and snot. And when my best friend showed up to my house to tell me goodbye, I laid my head on her shoulder and we wept. Even now, writing this, I am unable to contain my emotions. It was such an emotionally heavy time. It was probably the hardest thing I’ve ever done.
“Those who sow in tears will reap with shouts of joy.” -Psalms 126:5

I cried in my car the whole way to Fort Worth. What lay ahead was unknown. We were leaving behind our family, friends, and community. The call of the Lord is rarely easy or convenient. It forces us out of our comfort zones, and onto an unknown path. But we don’t go alone. He equips us with Himself. He goes before us. He has paved the way. I have seen God’s faithfulness so much in the month that we have been here.

Lainey loves her new school. Mike can’t believe that he landed his dream job. And the dream that God put in my heart two years ago to be a stay at home mom has finally come to be. It isn’t always effortless. Some days are hard. It is a weird feeling to be in a town full of people that don’t know your name. Especially coming from a place where I was well known. But God has changed my heart in so many ways, and in such a short amount of time. I look around and I can’t believe we are here. I can’t believe we made it. We did it. We moved.

View all posts by amandamirano